The natural environment of Ons Island

If you're a nature lover, you shouldn’t miss out on this stunning landscape

The Atlantic Islands of Galicia Marine-Terrestrial National Park is made up of the Cíes, Ons, Sálvora and Cortegada archipelagos and the surrounding marine waters. These islands, which have very steep and rugged coastlines (with many cliffs and sandy deposits), are part of a mountain range that sunk into the sea many millions of years ago, where schist, granite and gneiss predominate.

The physical environment of Ons Island

Ons Island is part of an archipelago comprised of Onza Island (to the south) and several islets surrounding the coast: A Freitosa and A Freitosa de Terra, O Centolo, O Cairo, A Laxe do Abade, A Pedra do Fedorento, A Illa do Xuvenco and O Cón dos Galos. The island measures 414 ha and stretches longitudinally from north to south, perpendicular to the Ría de Pontevedra.

Ons Island has a plateau-like relief, with several flat peaks that form heather and gorse moorlands. Its highest point is Alto do Cucorno (128 metres above sea level), beside the lighthouse, and it’s 4 km away from mainland Spain. The east coast (facing the estuary) is vastly different from the west coast, which faces the Atlantic Ocean. The former is low and rectilinear, and is where the beaches were formed and the inhabitants made their settlements. In contrast, the west coast is extremely rugged with cliffs, where caves known as furnas were formed by the ocean’s wave action. Two large inlets (Bastián de Val, to the north, and Canibeliñas, to the south) separate the two sides.

Onza Island (also called Illa de Onesa or Illa de Onceta in Galician) is located 600 m to the south of Ons Island. It’s rectangular with a relatively high profile (its highest point is at 68 metres above sea level) and has a total area of 32 ha. Its coasts are rugged and it has two small beaches—Onza Norte and Onza Sur—, which are almost inaccessible, as they are found beneath cliffs and surrounded by reefs. Vegetation is shrubby (devoid of trees) and its western side is mainly a nesting site.

Although the dominant climate in the Rías Baixas is the humid oceanic climate, the archipelagos of the Atlantic Islands of Galicia National Park have a subhumid Mediterranean climate with Atlantic influences. There is less rainfall, with milder temperatures than those in coastal regions and it is windier. On Ons Island, the average annual precipitation is between 800–900 mm and temperatures are roughly around 14.5 ºC. 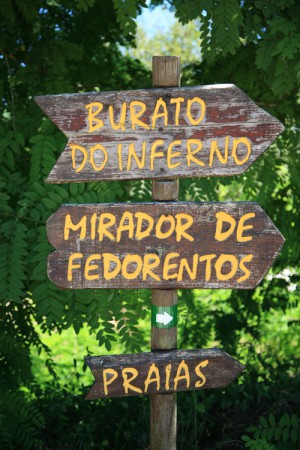 Signs on Ons IslandThe marine and territorial ecosystems on the Ons Archipelago are protected under its status as a Park and include an important seabird colony and seabeds with great biodiversity. The arrival of cold currents in the Rías Baixas leads to waters that are very rich in nutrients and oxygen, favouring greater species richness.

The flora on Ons island is mainly scrub: heath, blackthorn, ferns, broom, Retama broom (Cytisus insularis) and gorse. The trees that can be found are mainly willows and alders in the small watercourses, and to a lesser extent, eucalyptus, pine and Pyrenean oak trees. Ons is currently deforested, but in the past, it was covered with native species such as Pyrenean oak (Quercus pyrenaica), cork oak or the white crowberry (Corema album) in its sandy areas.

In terms of the fauna on Ons Island, the many bird colonies inhabiting the archipelago are of particular interest. Caspian gulls (Larus cachinnans), whose largest colony worldwide is found in the Cíes Islands, and common shags (Phalacrocorax aristotelis), which nest in the cliffs, abound. Other birds such as the red-billed chough and the Alpine swift can also be found in great numbers. In contrast, the common guillemot (Uria aalge) and the lesser black-backed gull (Larus fuscus) are seen less and less.

Terrestrial mammals are scarce. Greater white-toothed shrews (Crocidura russula) and common otters (Lutra lutra) stand out, but other invasive mammals eventually became a plague as Ons did not have any predators such as foxes, mustelids or birds of prey. With regard to marine mammals, the most common are short-beaked common dolphins (Delphinus delphis), common bottlenose dolphins (Tursiops truncatus) and sperm whales (Physeter macrocephalus). There are also sightings of fin whales (Balaenoptera physalus) and other cetaceans, and to a lesser extent, loggerhead sea turtles (Caretta caretta) and leatherback sea turtles (Dermochelys coriacea).

The habitats on Ons Island

The marine environment represents approximately 85% of the Atlantic Islands of Galicia Marine-Terrestrial National Park. The warm surface water pulled by the Gulf Stream, tidal amplitude and local upwelling (a phenomenon that brings nutrient-rich water to the surface during the summer) encourage the development of numerous habitats. Many organisms adapt to extreme changes and live in the rocky communities of the intertidal zone; these are the mussels (which occupy a large area), goose barnacles (which are very exposed to battering by sea waves) and the limpets (which attach themselves to rocks in order not to dry out). In the subtidal zone, the brown algae forests stand out, with species exceeding two metres in height. All of them form an ecosystem that provides food and shelter for other marine species: spider crabs, conger eels, Mediterranean rainbow wrasses, velvet crabs, octopuses, etc.

In the sea, the National Park’s main mobile seabeds are of sand, gravel and maerl (coarse shell gravel). On sand bottoms, there is an abundance of bivalves (scallops and queen scallops, as well as clams, cockles and razor clams), flatfishes that blend into the bottom (plaice, ray, cuttlefish and turbot) and a rich interstitial fauna that lives between the grains of sand. In contrast, gravel bottoms are made up of the remains of shells and molluscs, and are where microalgae and species such as scallops, variegated scallops and razor clams live. Lastly, maerl bottoms are made up of calcareous algae that accumulate—although only those in the top section are alive—and species such as the banded carpet shell, rayed artemis and long snouted lancetfish, as well as the early stages of many other species can be found.

Among terrestrial ecosystems, the rugged coastal cliffs, subject to the impact of the wind and the sea, stand out. Ons Island is the perfect nesting site for seabirds, but it is also a habitat with tough conditions. The living conditions on the dunes and beaches (wind action, high levels of sun exposure and high salinity) are the reason for the scarcity of native forests and why most of the island is covered by scrub.

The flora on Ons Island

On the cliffs, there’s only room for vegetation that can survive in hostile environments with the impact of the wind, the salinity of the sea and the bird colonies nesting under the overhangs. One strategy for plants to survive here and offer greater wind resistance is to adopt a padded shape. The most noteworthy species in these environments are sea fennel, Calendula suffruticosa (subespecies algarbiensis), sea thrift and garden angelica, where the cormorants build their nests.

Plant species on the beaches and dunes develop strategies to deal with the high levels of sun exposure, the scarcity of nutrients, the instability of the ground, salinity and the wind. To survive in such harsh conditions, the plants bury their roots in the sand, which has a two-fold purpose: searching for sustenance and taking root, to prevent the wind from carrying them away. It is worth pointing out that there are communities of European beachgrass, Portuguese crowberry, field pennycress, mallow bindweed, sand couch-grass, curry plant and Linaria arenaria, which is categorised by the International Union for Conservation of Nature (IUCN) as “critically endangered”.

On Ons Island, the development of arboreal vegetation is slowed down by environmental conditions, and it is only in the most sheltered areas of the east coast that you can find small groups of bay laurel, Pyrenean oak, willow and elder trees. Most of its land area is covered by shrub formations such as heather, blackthorn, asparagus, fern and Montpellier cistus. But the most emblematic of all is definitely the Retama broom (Cytisus insularis), a woody plant that grows to two metres tall and accompanies gorse on the cliffs. It’s a distinctive species of the National Park and categorised as “endangered” by the International Union for Conservation of Nature (IUCN).

The fauna on Ons Island

If the variety of plant species is wide, the variety of animal species is not far behind. With regard to invertebrates, there are endemic species among the orders of Blatoptera (cockroaches), Coleoptera (beetles), Dermaptera (earwigs), Lepidoptera (harlequin butterfly and Old World swallowtail) and Orthoptera (grasshoppers and crickets).

Low soil moisture and the absence of permanent watercourses make amphibians (fire salamander, Iberian painted frog and Iberian newt) scarce. In contrast, it is possible to find reptiles such as the Iberian wall lizard—which is colonising—, the ocellated lizard (the largest in Europe, measuring roughly 18 cm without its tail) and snakes such as the ladder snake, the southern smooth snake and the viperine water snake.

Most of the mammals in the Park are not native to the island. They were introduced by humans and pose a real threat (wildcat and American mink) to some native species. It’s also common to find small rodents (house mouse, wood mouse, brown rat and black rat), bats (common pipistrelle, serotine bat and greater horseshoe bat) and other mammals such as the European rabbit, European hedgehog, greater white-toothed shrew and European mole.

But without a doubt, birds are the centre of attention in the Atlantic Islands of Galicia National Park. The abundance of resources, the scant human presence and the availability of nesting sites are factors that favour their settlement, and being the perfect home and transit point for many species is driving birdwatching tourism. In terms of seabirds, here you’ll find the largest concentration of yellow-legged gulls (with about 20,000 breeding pairs) and common shags (about 1,000) in the world. The latter is categorised as “endangered” according to the Red List of Birds in Spain and the European storm petrel is considered by it as “vulnerable”.

More specifically, Ons Island is home to one of the most important breeding grounds for the lesser black-backed gull in Spain, with more than 100 breeding pairs. Hundreds of great cormorants use the archipelago as a roosting site in winter, a time when the Northern gannet can often be found, while in summer the Sandwich tern and the Balearic shearwater can be seen. On beaches and cliffs, common sandpipers, herons, egrets, turnstones and curlews and other waders are also common. The colonies of birds of prey (northern goshawk, common buzzard, common kestrel, European nightjar, peregrine falcon and Alpine swift) and small birds (tits, warblers, blackbirds, woodpigeons, finches, turtledoves and greenfinches) that nest among the trees are also noteworthy.